You Decide: Craft from the Past

In our 'Craft from the Past' posts, we seek inspiration from our ever-growing studio book collection, and attempt to revamp vintage craft projects.

At Five Corners, we're always on the lookout for weird (and cheap!) crafty books. We have amassed a huge stack of books -- but our very favourites are the funny and ridiculous publications from the seventies and eighties. 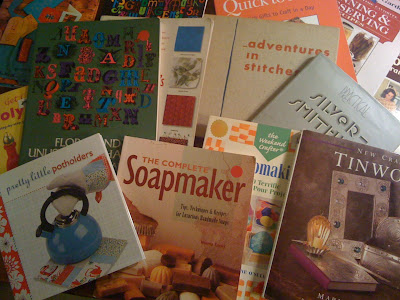 The hardest part can be just choosing from all the great, weird projects. So this time, we're letting you decide! Majority rules!


And as the copy reads, it is "well received at any fund raising event". Huh? 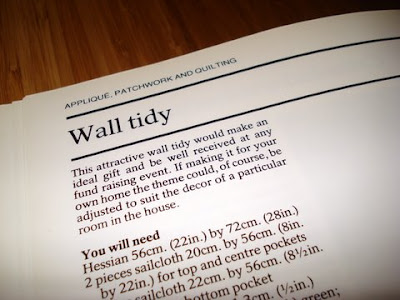 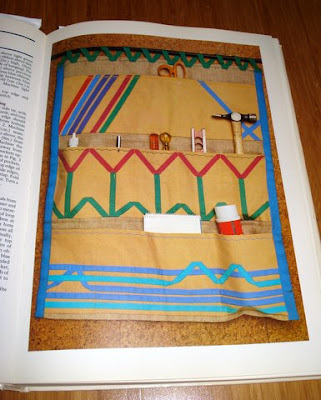 Your second choice, also circa 1982, is an 'Embroidered Notebook Cover'. As you can see, it looks quite stunning beside your rotary phone. So there's that. 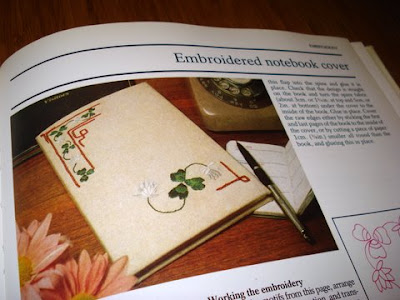 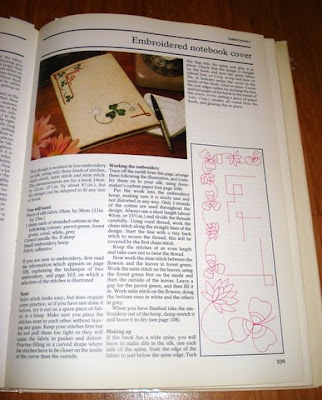 And your final choice -- a 'Simple Seating System'. As they always say, you're not fully grown up until you've sewn your own uncomfortable couch. (That's totally a saying, right?). 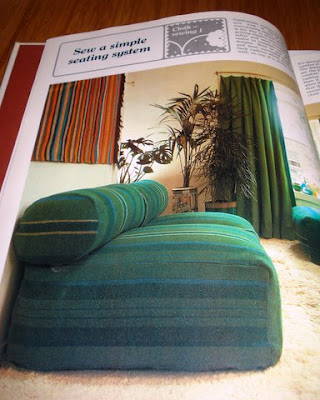 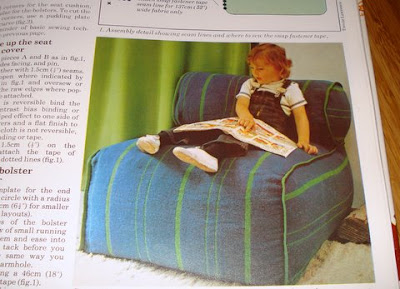 Okay, you have until Saturday night to vote... and then we'll get to the task of making a modern version of your assignment!


Which vintage craft project would you like us to tackle?

Email ThisBlogThis!Share to TwitterShare to FacebookShare to Pinterest
Labels: Crafts from the Past, You decide

In all the craziness and chaos of the Christmas season I neglected to take pictures of any of the presents I made. I was just thrilled to have even finished them in time! So, unlike Sarah, I don't have any fancy photos to show you (which clearly makes her the better blogger around these parts...) Instead I thought I would tell you a story.

Some of you may recall that our first ever blog post was about 'Art Basement Guy' - a random man who appeared in the window of our studio one day last summer. Well, apparently there is something about Five Corners and random men in windows because here is another story about just that.

One recent rare sunny day the two of us were in the courtyard with Sadie, Five Corners' resident mannequin, taking photos for our Etsy listings. This involves all sorts of manipulations of the mannequin; taking her arms off to photograph bracelets, wrapping scarves around her neck, moving her around the courtyard, posing her in various ways. We were working away, minding our own business, when we heard a hollow sort of banging sound. Bam, bam, bam, bam. Both of us looked around but didn't see anything so we just ignored it and went on with what we were doing. But then it happened again.

We realized that it was someone knocking on a window. We peered at the windows facing the courtyard but didn't see anything. We heard it again so we looked up and realized that across the alley is an office building and anyone on the upper floors would be able to see us mucking around down there. We still didn't see anyone in any of the windows. What we did see was a big whiteboard propped up, facing outwards. On it, someone had written in big block letters "Leave the dummy alone!"

"It must be. What the heck?" Came Sarah's reply.

Just then someone inside the office picked up the board and waggled it back and forth. Then a man's face appeared next to it - he grinned down at us, waving and pointing to the message on the board.

We both burst out laughing and returned his greeting. A moment later he took down the board and with one final wave at us went back to whatever work he was presumably supposed to be doing. We went back to our photo session, but laughed about it all day. I wonder what he thought we were doing? I wish we had had a whiteboard of our own to write back to him. Alas, we all just went on with our regularly scheduled day, but brightened by the momentary interruption and the odd connection with yet another random man in a random window. 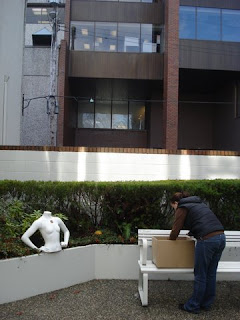 I've written about the highs and lows of my collecting instinct before (recap: high - when I finally get to use the glass jars I've kept since I was a teenager and they are perfect for my current project; low - the feeling that it's just a slippery slippery slope to having a space so full o' weird stuff you can't bathe and you're suddenly being featured on "Hoarders: Buried Alive").

Still, I love t-shirts. I always have and always will. I'd assembled quite a collection  -- including some rad tees from fun gigs in my twenties, a couple of very special teeny shirts from when I was a child, a few delightfully embarrasing ones (NKOTB concert tee November 1990 - what up?), and a lot of memories.

So many of my t-shirts reminded me of the people in my life - a David Letterman tee from a family trip to New York, a shirt screenprinted for me by a wonderful ex-boyfriend, one from a friend's newly formed record company, a shirt from an art show that represents another friend's graphic design, and a concert tee from the first show I ever went to with a friend and without my parents (Jesus Jones, hilariously, in 1991), to name but a few. Looking at them all at once, it became apparent that much of my life was mapped in this pile of shirts.

I asked a few close friends and family to contribute to my collection. I wanted the shirt that they no longer wore, but that held some meaning and memories for them. I put them all together in a giant two-sided quilt that I completed in the summer of 2008. 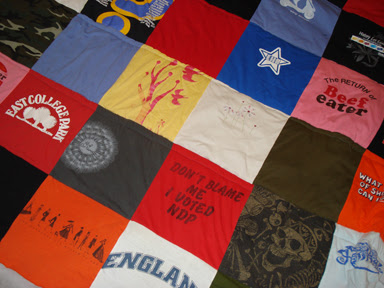 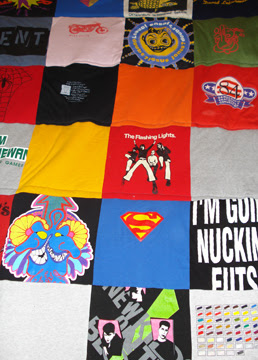 It's amazingly warm and weirdly stretchy -- and I just love it! 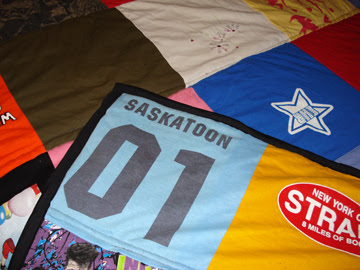 Tip time! It was a pain in the butt to sew since both sides were stretchy - If I've inspired you to give it a go, I'd recommend doing it single sided with a cotton or quilting fabric backing.

Anyway, my good friend Jeff made me promise that he could have my quilt when I die (creepy, dude!), so this summer I decided to make one for him as a Christmas gift (admittedly partially so he wouldn't kill me off). I enlisted my husband to donate some of his own well-loved (read: worn out) t-shirts. This version was all band/concert shirts and all are meaningful to the three of us - artists my husband and Jeff bonded over when they first became friends and shows we've seen together over the years. 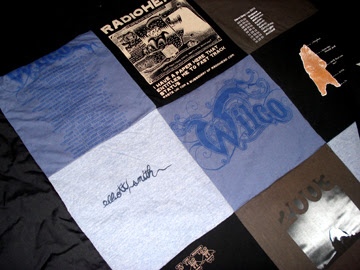 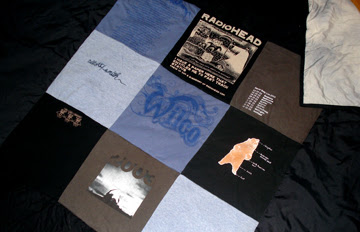 As Megan mentioned, we've spent the last month crafting up a storm in preparation for the holidays. Well, the steamy hot chocolate has been savoured, the carols have been sung, the vegan Nanaimo bars are long gone, and the gifts have been opened.

Now it's a brand new year. It's time to organize our closets, do a sit-up (yep, only one -- I'm being realistic), and blog it up!


Here's a gift that my husband and I made for my birding father-in-law this Christmas. A birdhouse that looks like his house. 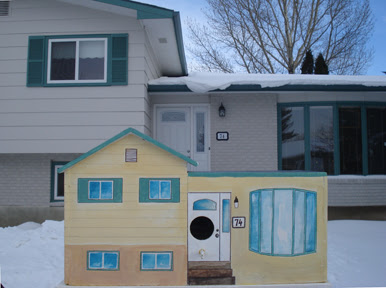 With a secret surprise if you look in the front door... there's a family picture on the wall! 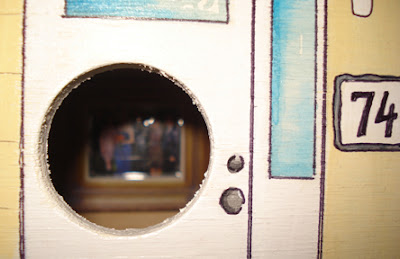 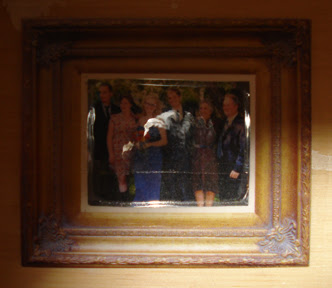 Stay tuned to see more of our handmade gifts!
Posted by Sarah at 7:23 PM No comments: 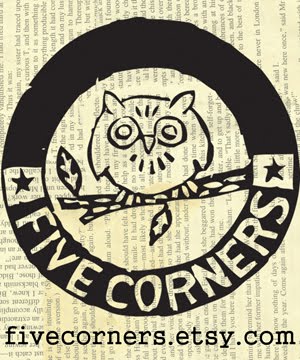